17th traditional meeting of Bosnian and Herzegovinian supplementary schools took place earlier this month at Derby Moor Community Sports College premises. Meeting itself was characterized by the guests as one of the best organized so far and will be remembered for the fact that the entire program has been prepared in memory of the victims killed in the Srebrenica genocide exactly 20 years ago.

First guests started arriving at 10am, both local and guests from other cities as well as supplementary schools from Birmingham, Coventry, London Victoria, Hertfordshire and Manchester. There were some important guests amongst them His Excellency Mustafa Mujezinovic, Ambassador of Bosnia and Herzegovina in the UK and Republic of Ireland, Mayor of the City of Derby Mr. Paul Pegg and president of the charity organization "Remembering Srebrenica", Dr Waqar Azmi OBE.

Remembering Srebrenica is the organiser of the UK events for the EU-designated Srebrenica Memorial Day, which takes place annually on 11 July. It runs a tailored education programme called Lessons from Srebrenica, which sees groups of delegates visit Bosnia and Herzegovina. The aim is to teach delegates the lessons of the country’s grim past to better inform the present. Alongside this, the charity conducts an awareness raising campaign, which is aimed at countering discrimination and building stronger community relations.

At the beginning of the program, the guests were addressed by Mr. Ferid Kevric who welcomed the guests and introduced them with the ordinance which was followed by the playing of Bosnian and Herzegovinian and British national anthems, after which Mr. Kevric invited the audience to a minute of silence and Fatiha remembering the victims who were killed in Srebrenica. From this point on, the program was led by Ajsa Bjelobrvic and Merima Kadralija, former pupils of Bosnia and Herzegovina Supplementary School in Derby.

Delivering short speeches, attendees were addressed by the president of our association in Derby Nermina Webster and president of BiH UK Network, Mr. Sabit Jakupovic followed by a speech from His Excellency Mr. Mustafa Mujezinovic, who expressed his gratitude for the invitation and spoke about the importance of such meetings and preservation of identity. After the ambassador we were addressed by the mayor of the city of Derby, Mr. Paul Pegg who also sent a clear message to our youngsters about the importance of identity, culture and traditions, regardless of the fact that they were born in this country.

The last speech before the beginning of the school presentations was delivered by Dr Waqar Azmi OBE, President of the charity organisation Remembering Srebrenica.  Dr Azmi spoke about the importance and moral duty of us all to remember what happened in Srebrenica towards the end of last century. School presentations followed Dr. Azmi’s speech and first on the stage was Supplementary School from Derby. During a very rich program, pupils of this school also read the chronology of the events in Srebrenica that happened between 5th and 16th July 1995.

After Derby it was the turn of Supplementary School from Hertfordshire followed by our neighbours from Birmingham and Coventry and then London Victoria. School from Manchester was last in order and very small in numbers but that did not stop them from getting perhaps the greatest applause for their performance.

Following school performances, traditional dance groups “Bosnian Pearls” from Derby and “Mladost Bosne” from Birmingham took to stage and showcased some great dancing skills to the amusement of all visitors.

At the end of the morning session, representatives of all supplementary schools were given a thank you certificate for participating in celebration of the 17th meeting of Bosnia and Herzegovina Supplementary Schools followed by an hour long break for the buffet after which we all moved to sports fields.

As I stated above, football tournament was played on a "round robin" basis, and each team has played against other after which points were calculated. Referees Almedin Hrncic and Nedzad Osmanagic with the help of Ohran Subasic and Cerim Alija made sure everything was running smoothly.

Most successful team and also the winner of this tournament was the team from Hertfordshire with all five wins. Second place went to Coventry with four wins and one defeat. Due to equal points Derby and Birmingham had to play again for third place in which Derby won 2:0.

At the end of football tournament all winners were presented with medals for first, second and third place in each of the above competitions as well as the winning team trophy, trophy for the best player and top scorer trophy which this time went to Suhret from Coventry with nine goals.

Also, awards were handed out for the best art and literacy work which have been evaluated by an independent commission and to our satisfaction, both honours and first place went to students from our supplementary school in Derby, Emina Hrncic won an award for best literacy work and Amela Subasic for best art work.

At the end, we would like to thank all those who came and made this meeting bigger, firstly His Excellency, the Ambassador of Bosnia and Herzegovina in London Mustafa Mujezinovic, the Mayor of the City of Derby, Councillor Paul Pegg, president of the organization Remembering Srebrenica Dr. Wagar Azmi OBE, Associate Principal Derby Moor Community Sports College Mike Shales, President of UK Network Sabit Jakupovic, president of Derby Bosnia Herzegovina Community Association Nermina Webster, Event Coordinator Rob Holmes, Supplementary Schools from Derby, Manchester, Birmingham, Hertfordshire, Victoria London and Coventry.

We thank all others who supported this event and we hope that in future we can have more of these wonderful events and gatherings in our city of Derby. 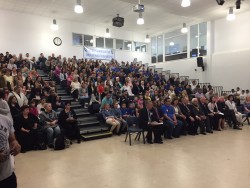